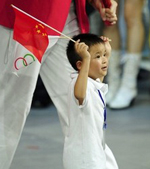 The Opening Ceremony of the Beijing Olympics was technically spectacular, not a surprise given that it cost at least $100 million (twice that of the Athens Games in 2004) and had the weight of an authoritarian government behind it. The gymnast who skywalked across the top of the stadium to light the torch performed a stunning feat that had me staring, mouth agape. And, of course, no one does fireworks like the Chinese.

But the whole thing lacked a certain amount of heart, like watching a high-budget Hollywood flick heavy on CGI special effects. It took a 9-year-old boy, Lin Hao, to provide a real face to the ceremony. Lin was trapped in the rubble of the terrible May earthquake that killed an estimated 70,000, including 20 of his classmates. After he freed himself, he went to rescue two other students and became a national hero. He marched in with basketball star Yao Ming and lit up the screen more than $5 million worth of fireworks. It was also adorable when he said "thank you" in English to the NBC reporter who interviewed Yao.