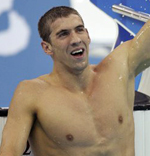 Michael Phelps won his first gold medal in his first Olympics race, blowing away the field in the 400 IM and setting a world record in the process.

Watching underwater video, it appears as if Phelps is half-fish the way his legs act like flippers. He is stunning to watch in the water and his goal of eight golds seems well within reach.

The best swimming story of the day was South Korea's Park Tae-hwan, who won the gold in the men's 400-meter freestyle. Four years ago in Athens, Park literally fell into the pool on the starting blocks and was disqualified without swimming a stroke, his Olympics over. It was nice to see him achieve glory after such a spectacular failure.