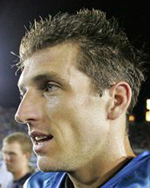 In the first half Monday, UCLA quarterback Kevin Craft (right) was the MVP ... for Tennessee. In the second half, Craft changed personalities and led the Bruins to a season-opening upset win over No. 18 Tennessee, 27-24, in overtime.

It's hard to overstate how lousy Craft was in the first half -- he threw four interceptions, including a killer at the end of the first half that the Vols ran back for a touchdown and a 14-7 halftime lead. But Craft settled down and was brilliant in the second half, going 18 for 25 for 193 yards in leading the unranked Bruins to four scores.

"I didn't get rattled at halftime," Craft said. "I have played this game before."

It was a great debut for new UCLA coach Rick Neuheisel, a former Bruin whose previous college coaching gigs at Washington and Colorado saw both teams being sanctioned for rules violations. After being a pro assistant the past few years, he has a fresh start and showed again he can coach.

For Tennessee, it's the second straight year they opened with a West Coast loss, following its 2007 defeat at Cal.