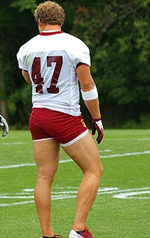 (Updated with new info at the end.)

Washington Redskins tight end Chris Cooley seems like a cool guy. He once said he lost at Fantasy Football against a friend who had Cooley as his tight end on a day where Cooley scored three times. He also has a nifty blog, but that caused him a bit of embarrassment when a picture on his blog inadvertently showed his penis.

Cooley intended to take a photo of a page from his playbook revealing the "Tight End Test" for Sunday's game against the Saints. The only problem? He was naked at the time, the playbook was in his lap, and so the picture included an image of Cooley's penis.

Oops! Though I am not sure why Cooley reads his playbook naked, Deadspin jumped all over the item, provoking this response:

Apparently that was just [an] unfortunate accident, one of the many hazards of nude blogging. The Cooley's have responded by removing the post from their blog, and according to text message from Chris's brother Tanner to [Deadspin], he wasn't happy to see his brother's cock meandering its way around the internet. But hey, nobody wants to see their brother's cock anywhere.

Deadspin was kind enough (damn them!) to photoshop out the offending penis and replace it as seen below. I saw the Deadspin item after it had already been airbrushed into oblivion. But readers who saw it in its glory seemed underwhelmed, with one writing: "Hopefully for his wife's sake he's a 'grower.' "

It is ironic that Deadspin is among the sites Cooley links to on his blog. Ah, the perils of the Internet!

Update: Here is a link to the original photo. It really seems much ado about nothing and I am not being snide; the image is hard to read at first glance that I can see why it never got noticed before it was posted. This recap from the Washington Post has some great reaction from Cooley and his brother Tanner:

So the team won, Cooley's 27-yard fourth-quarter catch was perhaps the biggest play, everyone celebrated, and eventually the Cooleys went home to Chris's house and logged onto the blog again.

"You can see EVERYTHING," Tanner pointed out.

So the Cooleys began to panic. They took down the item, which had by now migrated to other sites. Chris's wife was obviously concerned. "I can't believe I did that, I'm so stupid," Chris said to his brother, more or less. "Why were you even naked anyway?" Tanner asked, sensibly, leading to the explanation about the mess on the bed and the table. 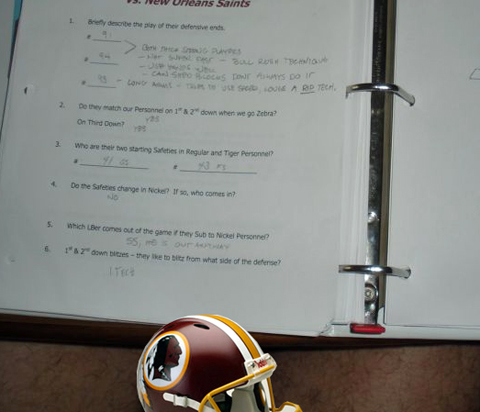