Physicists: Usain Bolt could have run a 9.55

Share All sharing options for: Physicists: Usain Bolt could have run a 9.55 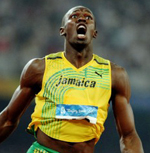 Jamaican sprint sensation Usain Bolt won the Olympic 100 meters in a world record time of 9.69, but he showboated the final 20 meters. Now, some physicists have calculated that Bolt could have run a mind-blowing 9.55 had he sprinted full on until the end. They have submitted their findings to the American Journal of Physics under the title: "Velocity dispersions in a cluster of stars: How fast could Usain Bolt have run?"

From the New Scientist:

Hans Eriksen of the Institute of Theoretical Astrophysics at the University of Oslo, Norway, and his colleagues, who normally spend their time pondering deep mysteries of the cosmos, wondered whether a few simple calculations might reveal how fast Bolt could have run.

So, in their spare time, they used television footage to measure Bolt's positions, speeds and accelerations as well as those of the runner-up, Richard Thompson. Their measurements show both Bolt and Thompson decelerating in the final 2 seconds of the race, with a larger drop in speed for Bolt.

The team then calculated what Bolt's time would have been had he only slowed down as much as Thompson, arriving at an answer of 9.61 seconds. But this may be too conservative, given how much Bolt outperformed Thompson in the first 8 seconds of the race. So the team also tried assuming, somewhat arbitrarily, that Bolt would have decelerated less than Thompson, by 0.5 metres per second squared in the final 2 seconds, which they say would have given Bolt a time of 9.55 seconds.

The scientists readily conclude that this was a fun exercise and that no one can say for sure how fast Bolt could have gone. Bolt's coach told Reuters after the Games that Bolt would have been timed in 9.52. But it's one of the coolest applications of science I have seen. Their next assignment: In percentage terms, how much more enjoyable would "Monday Night Football" be if ESPN canned Tony Kornheiser (do they make a calculator with that many decimal points?).