It’s never too late to get physical

Share All sharing options for: It’s never too late to get physical 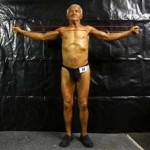 There’s hope for most all of us. Just check out Ray Moon.

The former millionaire restaurant owner won the Victorian Bodybuilding Championships in Melbourne on Sunday after beginning his training just five years ago. He’s overcome polio, open-heart surgery, prostate problems and financial ruin to become a body building champion. Oh, yeah. He’s 80. Nothing like a few wrinkles with your six pack. 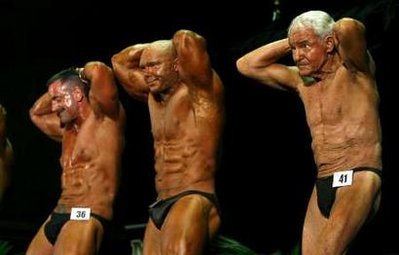 With rippling, head-turning muscles and the stamina of a much younger man, Moon was crowned champion in the “over 60s” category of a national amateur body building competition on Sunday.

“I usually go in the “over 70s” but they cut it out, so I was up against younger men,” Moon told Reuters by phone.

Moon, who turns 80 this year, follows a strict diet and training regime. “I train five days a week, two hours on exercises and cardio and I also walk three or four kilometres a day on the treadmill,” he said.