Share All sharing options for: Ryder Cup has new fans and heroes 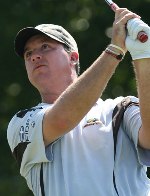 It was a rare Sunday this past weekend when I watched more golf than football. The Ryder Cup this year is now etched in as one of my favorite golf memories, and it may now be my favorite golf format. Pitting the Americans against the Europeans, the U.S. hadn't won since a shocking come-from-behind in 1999. Given that their best player, Tiger Woods, wasn't playing, they were expected to fall short again. Guys like Sergio Garcia and Lee Westwood just don't lose in the Ryder Cup. But this year, they lost to guys like Boo Weekley (right) and JB Holmes (who are both referred to in the media as 'rednecks') and rising star Anthony Kim; Guys many sports fans have never heard of before.

It was a contrast of styles. The Europeans were genteel, sophisticated. They were reserved in their manner until they saw the tidal wave of American support about to crash on their heads on Saturday and tried to turn up the volume, yelling and pumping their fists. But by then it seemed out of place and a bit awkward; They were trying to play the Americans' game, but they weren't up to the task. Weekley made the most of it. After Westwood complained that Weekley was riling up the crowd too much between putts, Weekley reserved his celebrations for between the holes, and his celebrations and the crowd noise doubled in intensity. Westwood says he was abused by fans after that; after his whining, I'm not surprised. You could almost see the Europeans turning up their nose at these bloody Americans who didn't know how to behave properly on a golf course. But in the end it was those bloody Americans taking the win, 16.5-11.5. It is only the second time since 1995 that the U.S. won the biennial event.

My favorite part of the event was watching the teamwork and camaraderie. In every other golf tournament on television, it's every man for himself. This one features captains (for the U.S., it was Paul Azinger; Nick Faldo lead the Europeans) riding around in carts, charging up the crowd, coaching their players. The Ryder Cup is a team event, and it was great to watch all of these guys treat it as such.

The 2010 Ryder Cup will be in Wales, and the Europeans will be out for blood. I'm penciling it into my calendar now.