Joey Porter backs up his words

Share All sharing options for: Joey Porter backs up his words 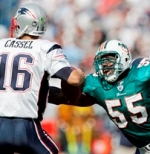 Now, I along with every other Dolphins fan wanted to smack Joey Porter's lips clean off his face when he said this. It's one thing to get an opponent mad, it's another thing when the team you're pissing off has just won 21 straight games. But Joey and the Dolphins shocked the world on Sunday afternoon and proved the cliche "...any given Sunday."
Indeed, it seemed like 1992 all over again last week when the New England Patriots got decimated by the Miami Dolphins, 38-13 in Foxboro. It also probably seemed like the 1990's to the players since the majority of them have not seen a single-wing offense since they were in high school. The "Wildcat" formation, as Miami calls it, was debuted by the Dolphins this week to amazing success. It seemed every time Ronnie Brown got the direct snap he was running it in for a touchdown. In fact, Ronnie Brown became the first player in 84 years to run for 4 touchdowns and pass for one more. Hope you started him in your fantasy league.

On behalf of myself and the rest of the Dolphins Nation, thank you Joey Porter. Thank you for reminding us what confidence is. Or is that arrogance? Well, even if it is the latter, I'll quote former WWF wrestler "The Model" Rick Martel: "Ah, Arrogance! The sweet smell... of VICTORY!"