Oregon State knocks off No. 1 USC

Share All sharing options for: Oregon State knocks off No. 1 USC 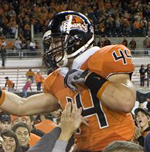 USC's road to college football's national championship hit a major speed bump after the Trojans were upset, 27-21, by Oregon State at Corvallis, Ore. It was the second consecutive time Oregon State beat USC at home and continued a bad tradition for the Trojans.

In 2007, the Trojans missed out on the national title game after Pacific-10 conference losses to Oregon and Stanford (the latter was a killer). In 2006, USC lost to Oregon State and UCLA, again missing out on a chance to play for the title.

On Thursday, Oregon State sprinted out to a 21-0 halftime lead, but USC rallied to get to within 21-14. A late fourth-quarter interception of Trojan QB Mark Sanchez allowed Oregon State to score the clinching touchdown. USC scored inside two minutes to cut the lead to six, but the Beavers recovered an onside kick and ran out the clock. USC's top-ranked defense was shredded for 344 yards, while Sanchez was repeatedly harried and had little time to throw.

USC is not yet dead for a national title bid, but will have to win the rest of its games while teams ahead of them lose. Trojan fans weren't expecting to be scoreboard watching this early in the season.