Share All sharing options for: Todd Jones Calls It A (Homophobic) Career 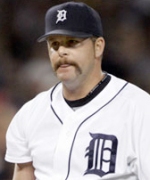 Fu Manchu mustache enthusiast Todd Jones wrote in his Sporting News column last week that he was hanging up his spikes. He pitched 16 seasons for... well, pretty much everyone. He ended his career with 319 saves, 868 strikeouts and an ERA just a hair under 4. His greatest, and probably most revealing moment came in 2003 when he made some choice comments about having a gay teammate when he was asked about a play called Take Me Out -- which as you might guess as you're reading this blog on a gay website, is about a gay baseball player.

"I wouldn't want a gay guy being around me," Jones said. "It's got nothing to do with me being scared. That's the problem: All these people say he's got all these rights. Yeah, he's got rights or whatever, but he shouldn't walk around proud. It's like he's rubbing it in our face. 'See me, Hear me roar.' We're not trying to be close-minded, but then again, why be confrontational when you don't really have to be? Because if (the team) thinks for one minute he's disrupting the clubhouse -- if he doesn't hit 50 homers or win 20 games -- they're not going to put up with that."

Fortunately, there's never EVER been a gay man to ever play professional baseball. Ever. Because, we all know a gay outfielder would be wearing sequined gown and stilleto heels as he was tracking down a fly ball. I won't even tell you what a gay catcher would be doing.

So, farewell, Mr. Jones. Just remember, there's a reason why when you type in Todd Jones into Firefox's Google's search bar, the first suggestion that comes up is "todd jones sucks".