QB's wristband: 'My dick is tiny too!'

Share All sharing options for: QB's wristband: 'My dick is tiny too!' 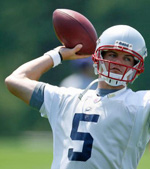 The Boston Globe has apologized for running a photo of New England Patriots backup quarterback Kevin O'Connell, who was wearing a wristband with the words "My dick is tiny too!" (photo after the jump).

The correction read: "Editor's note: A photo on Page C6 in Sunday's Sports section showed Patriots rookie quarterback Kevin O'Connell wearing a wristband with inappropriate language written on it. The photo did not meet the Globe's journalistic standards and should not have been published."

The photo is not available online but was on Page 6 of the Sunday Sports section. It's obviously a case of a photo editor not seeing the small print on the wristband, since no paper would ever deliberately publish such a photo. Still, it is pretty funny.

Careful inspection of the Barry Chin-shot photo reveals a sticker on O'Connell's left wrist (over his play-call wristband) that reads, "My dick is tiny too!"

Adding to the regrettable photo was the caption: "The Patriots are refining Kevin O'Connell's mechanics, but they believe he has the tools to be a top-flight quarterback."

Chris Cooley's penis, players grabbing genitals and now Kevin O'Connell's dick -- it has been quick a sexy first four weeks in the NFL.

Hat tip to Deadspin for providing the photo: 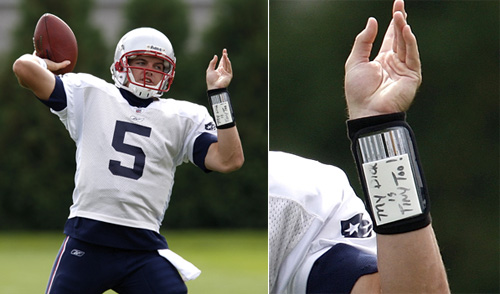