Share All sharing options for: Old man in Oakland finally gets cable 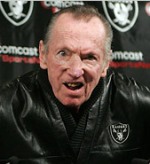 Lane Kiffin's personal hell is now over. Al Davis fired him this morning and has replaced him with offensive line coach Tom Cable. One of the items that's getting buried in this story though is Al Davis' stubborn refusal to pay Kiffin the rest of his contract. It was widely assumed he's waited this long to fire Kiffin because he wanted him to quit and thus not have to pay him, but now, it's officially done. Davis is apparently going to try and claim 'insubordination' as the reason why he won't pay Kiffin. However, last time Grandpa Al tried that was with Alex Gibbs, and Gibbs won the court case. Should be fun to see Lane breaking the Al Davis bank.

Cable brings not only a sexy bear figure to the Colessium sidelines, but also 4 years head coaching experience with the University of Idaho! He won only 11 out of 46 games before being fired from there, but that's besides the point. Coincidentally, in one of those fate coming together moments, Cable actually played on the offensive line for the Idaho Vandals back in the 80's when now-fired St. Louis coach Scott Linehan was the QB. Usually, linemen who become coaches tend to be much more conservative in their approach to the game, so it's unclear how Cable's going to use the howitzer JaMarcus Russell has for an arm or the bazooka Sebastian Janikowski. He almost certainly though won't be attempting 76 yard field goals though.