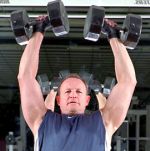 For years, one of our favorite Outsports pastimes is to chronicle how often NFL announcers mention the physique of buff ref Ed Hochuli. We also might have been the first to call him "Guns." So it was amusing to hear NBC Al Michaels say this about Hochuli during the second quarter of the Giants-Redskins season opener when the camera flashed to Ed:

I also found this comment on a sports forum about Hochuli: "If I was to turn gay, and play with a man's muscles, I'd choose Hochuli."