Gay models have future in wrestling?

Share All sharing options for: Gay models have future in wrestling? 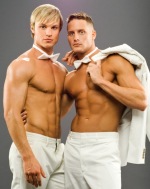 TNA Superstar Angelina Love, one half of The Beautiful People tag team (with Velvet Sky), brought Shaun & Paul out as her special guests – her personal escorts, so to speak – to “The Spin Cycle.”

Love is one of three wrestlers on the newest edition of the popular show, along with fellow wrestlers BG James, Consequences Creed and Jimmy Rave. Love was the only one with two hand-picked, personal escorts. The blonde Knockout was walked to her chair by Shaun and Paul – and Paul even kissed Love’s hand.

The Spin Cycle averages more than 500,000 viewers at www.tnawrestling.com and is hosted by TNA’s Jeremy Borash. Thanks to shows such as “The Spin Cycle” and “TNA Today”, TNA’s YouTube channel is among the most viewed on the popular video website.

“I can’t say I was overly surprised Angelina had her own escorts, Shaun and Paul, walk her onto the show because she truly believes she’s just that big, popular and important, to put it mildly,” said TNA announcer Jeremy Borash, host of “The Spin Cycle.”

Shaun and Paul were, arguably, the most popular models on Season Three of the JDMA. They live in Orlando and sat in the front-row for a mid-August taping of TNA iMPACT! (Spike TV, 9 – 11 p.m. ET). Shaun is the bigger pro wrestling fan of the two, and was quick to recall wrestlers from his childhood.

“We had a great time at Impact and look forward to going to another TNA show,” Paul said. “When Angelina asked us to escort her onto the show, we were happy to oblige.”

Shaun and Paul are going to California in mid-November to get married in what will be, no doubt, one of the most high-profile, celebrity-filled gay weddings in the state. The two then will journey to Tahiti for their honeymoon. (Anderson said the exact date had not been finalized, though they were leaning toward Nov. 15.)

“We’ve been talking about this for a while,” Anderson said. “We’re going to take advantage to the fullest and go to California and legally get married. We want to get that stamp of approval from the U.S. Government, not just from our family and friends.”

Shaun & Paul have been dating for almost four years. They will be the grand marshals for Orlando’s Gay Pride Parade on Oct. 12.