Share All sharing options for: The Michael Irvin Show 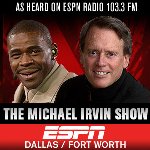 My old pal Kevin Kiley, a sports radio host who’s had me as a guest on his shows on Fox Sports Radio and ESPN Radio, is now the co-host of the Michael Irvin Show on ESPN Radio in Dallas. He’s been trying to get me to come on the show for a couple months, and today I made my first appearance, talking football and picking five NFL games.I must say, Michael was fantastic. We talked before the show and he was so excited to have a gay guy coming on picking football games because of how against-the-norm it is. And after I gave some assessment on the Patriots’ offense and how it’s designed to succeed in bad weather (like an oncoming tropical storm), he said it was good analysis that I was offering. I asked him if he was surprised and he said yeah, he was pleasantly surprised. He wanted to bring me on to really challenge his listeners about their prejudices against gay people; and from his reaction, I’m hoping I delivered beyond his expectations.

After I got off the phone, they got a bunch of calls, mostly perplexed guys who didn’t know what to make of football picks that mixed analysis of the Dolphins defense with comments on Brett Favre’s good looks. Michael was asked at one point if he'd be comfortable playing with a gay teammate, and Michael's answer was great: He said there are gay guys at this gym and he walks around nude with them there. "They just can't touch." Kevin and Michael both knew these calls were coming, and they both really welcomed them. Big kudos to both of them. I’ll be on every Thursday or Friday.

For the record, my picks this week are: