Share All sharing options for: Matt Ryan to NFL: 'Yeah, I'm a stud' 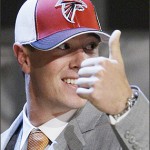 Matt Ryan, apparently still a little giddy in the wake of signing his six-year, $72 million contract, today forgot he's the quarterback for the Atlanta Falcons. (Yes, the 4-12 Falcons from last year's Michael Vick/Bobby Petrino mess.) His first pass in his first game with the Falcons? A 62-yard touchdown. His first game in the NFL? A 34-21 win over the Detroit Lions.

Ryan was the first quarterback to throw a TD pass on his initial NFL attempt since Michael Bishop for New England against Indianpolis on Oct. 8, 2000, according to the Elias Sports Bureau.