It's often said that it's easier to be the hunter rather than the hunted. The East Carolina football team will find out soon enough whether that statement is true or not.

Fresh off impressive back-to-back victories over ranked squads from Virginia Tech and West Virginia, the Pirates have played the underdog role extremely well. But now we're going to see if ECU can handle the added pressure that comes with those victories.

The Pirates will likely be favored in each of their remaining games, including road contests against the Atlantic Coast Conference's NC State (Sept. 20) and Virginia (Oct. 11). In Conference USA play, East Carolina will encounter a pair of road games that are tougher than they appear on paper -- at Central Florida and Southern Miss. It's not an easy stretch by any means, but it pales in comparison to the task this team has already accomplished.

In dismantling a team (West Virginia) expected to win the Big East title, the Pirates looked overpowering, particularly on defense in the 24-3 win. ECU hounded Mountaineers quarterback Pat White all day Saturday, limiting him to a lackluster 72 yards passing and 97 yards rushing. More importantly, White failed to reach the end zone a single time. That's a downright awful day for a Heisman favorite.

Now things turn interesting for East Carolina. With the two heavyweights on the schedule already out of the way, how will ECU respond? In a lot of ways, this ECU team is resembling the 2001 Fresno State team led by David Carr that looked hell bent on reaching not only a BCS bowl, but the national championship game. That Bulldogs team began the '01 season by beating three consecutive ranked teams (Colorado, Oregon State and Wisconsin) and was already up to #8 in the Associated Press poll in early October. That's when everything went thud.

A young upstart team named Boise State was about to storm onto the national scene in its first season as a member of the Western Athletic Conference. The Broncos busted the Bulldogs' chops 35-30, and Fresno State would not only lose its unbeaten season but would fall again the following week at Hawaii 38-34. It was demoralizing for a team that began the year so impressively, including that road win over the eventual Big 12 champion Buffaloes.

East Carolina needs to be careful not to get caught up in the press clippings or to start believing the hype -- yet. No team -- especially one of the non-BCS variety -- can overlook anyone anymore. Ohio State fans know this as well as anyone after last weekend. 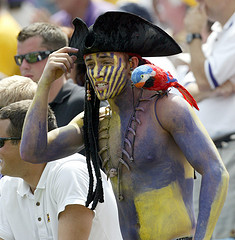 And while ECU needs to stop believing the hype, so does the mainstream media. The ESPN analysts were falling all over themselves after the Pirates' victory over West Virginia. ECU was unbeatable, they said. ECU will roll through the season unbeaten because no remaining opponent is as good as Virginia Tech or West Virginia, they said. Wait a second. When you're talking about mostly 18- to 22-year-olds, anything can happen. A bad referee's call here, a botched snap there, a disastrous fumble at the goal line... ECU's magical season could come to a screeching halt at any moment. (See Stanford winning at USC last year, for example.)

The bullseye is now squarely on East Carolina. Suddenly a win over the Pirates becomes a big deal to every opponent on the slate. And you know one of those ACC teams wants to end the run of the C-USA upstart.

For Pirates fans, college football fans in general, and fans of non-BCS teams in particular, enjoy this ride. It's much more of a rarity than the norm. ECU could go all the way... or not. And the way things are going this season, there are a few other teams like BYU, Fresno State, Boise State and Utah from non-BCS conferences waiting in the wings to pick up the flag for the Little Guys of the World if East Carolina should fall.