Share All sharing options for: Measuring isn't an exact science, the NFL learns 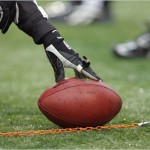 Gay men know a thing or two about the inaccuracies of measurements. Those cited online always tend to be a little smaller in real life. Craigslist or Manhunt, anyone?

So I read with a bit of amusement an article exploring why the NFL continues to use sticks and a length of chain to gauge whether a team gets a first down. You'd think -- what with all of the attention, money and careers on the line -- that the premier professional football league in the world might find something a little more tech savvy.

"There's a certain amount of drama that is involved with the chains," said the Giants' president, John Mara, who is also on the N.F.L.'s competition committee. "Yes, it is subject to human error, just like anything else is. But I think it's one of the traditions that we have in the game, and I don't think any of us have felt a real compelling need to make a change."

For 103 years, teams have needed 10 yards to gain a first down. That was before there were four downs, six points for a touchdown and even the NFL itself. The league says it knows the chains aren't fully accurate. Yet, the chains remain in place both for the drama of television and the cost of installing an alternative. Drama and size. No wonder we like football.

"Is it perfectly accurate?" said Mike Pereira, the N.F.L.'s vice president for officiating. "No, I don't think it is."

The method, used at all levels of American football, remains virtually unchanged and unnoticed after 100 years, taking place beyond the scope of the television camera and the focus of the fans until a precise measurement is needed. Even at this time of year, in the midst of the college bowl season and the start of the N.F.L. playoffs, little thought is given to how the 10-yard increments are measured in the country's most popular sport.

On a first down, one end of the chains is placed along the sideline by one member of the seven-person chain gang - hired for game-day duty by the home teams - six feet from the field, supposedly even with the front tip of a football that will be snapped at least 25 yards away. When a play ends, an official estimates the spot, usually marking it with a foot and tossing the ball to another official to set for the next play. When a first down is too close to call, the chains are trotted onto the field.

What seems closest to getting a hard look from the NFL is a creation from First Down Laser Systems. It's a laser system built into the sticks attached to the chains. A built-in gyroscope and an automatic level keep the beams pointed straight.

Rogers Redding, the secretary-rules editor for the N.C.A.A. football rules committee, said the chain method "may not be superaccurate, but it's as accurate as you need."

After all, spotting the ball with an official's foot and then setting it down across the field is hardly precise, either. The offense's center often moves the ball before the snap. And, Redding pointed out, who's to say that the yard lines on the field are perfectly measured in every stadium?

"It's kind of a diminishing returns thing," Redding said of reinventing the chains. "How much do you want to invest in this form of accuracy?"