Double-Ds at the Kings game

Share All sharing options for: Double-Ds at the Kings game 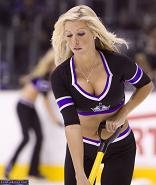 Finally in Los Angeles after my five-year hiatus, I was excited by an offer from Dax, our hockey blogger, to join him for a Los Angeles Kings game last night. They played the Tampa Bay Lightning. The Kings were terrible. But even more memorable than missed shots and badly choreographed fights was what happened each TV timeout: Four scantily clad women skated onto the ice and scooped up ice shavings to clean the ice. I've been watching hockey at every level for 20 years, and I'd never seen anything like it. Cleaning the ice after every five minutes of play? Clearly a ploy to get some buxom women in front of all those straight guys in the audience; Even the dozen gay guys I was with noticed.

Is this an L.A. thing? Have other NHL teams latched onto this silly display? And why do the guys on the squad get to wear pants and jackets? Yes, I know the answer: Because it makes straight guys squirm. But I want to see some abs!