Share All sharing options for: Mock Nike ad is anti-ballet, not anti-gay 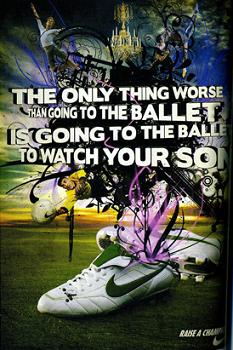 Here we go again. Some art design student made a mock Nike ad that ran in CMYK magazine. The ad's tag line read: "The only thing worse than going to the ballet is going to the ballet to watch your son." Some gays apparently got GLAAD involved because the ad is supposedly anti-gay; Ted Rybka, head of GLAAD's sports desk, in turn got an apology from the magazine's editor.

I totally get GLAAD and Rybka's role in this: Some gay people complained and they took it up with the magazine on their behalf. But for crying out loud, this isn't anti-gay! I am so tired of hearing these complaints every time a company does something that mocks feminine behavior. Welcome to 2009: Feminine behavior DOES NOT EQUAL gay behavior!!

Just because some student is mocking boys who take ballet doesn't mean the ad is anti-gay! I can't stand the ballet. Not all gay people like the ballet, and all men in ballet aren't gay (in fact, it's likely that most aren't). So some kid wanted to mock people who choose to take ballet; Gay people mock sports-lovers all the time, coming up with bullshit terms like "butch" to put them in a neat little box. I'm sorry, ballerinas are not a protected class!

Good for GLAAD for getting the story right. Now, to the rest of you who want to occupy their time with nonsense like this, they have more important things to do. So go take a boxing class or something and let your aggression out that way. Maybe I better do the same . . . .