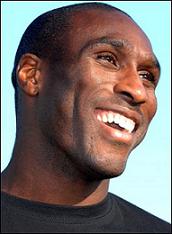 A few weeks ago, we nominated Soccer Homophobes as one of our six Outsports Jerks of the Year. This week came down news that 11 of those homophobes will be paying a price as they have been charged with indecent chanting at a soccer game between Portsmouth and Tottenham on Sept. 28, 2008.

They were charged with indecent chanting at a football match using words which were essentially swearwords," a police spokesperson said. "They weren't appropriate to be used at all, especially where there were children and we received a number of complaints."

The chants from the Tottenham fans were directed at Sol Campbell, a player with Portsmouth. The chants these nasty fans allegedly rained down on Campbell:

According to Pink News:

Indecent or racist chanting is an offence under the Football Offences Act 1991 and carries a fine of up to £1,000 and a football banning order.

Police are still looking for five men; You can see a picture of all 16 men here.