If only his name were Chad Manning

Share All sharing options for: If only his name were Chad Manning 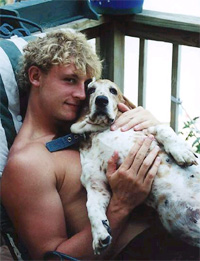 When in doubt, go with an old standby. That's what voters for the NFL MVP Award said today by selecting Peyton Manning the League MVP. Not a terrible choice: He played pretty well overall, very well down the stretch, and his team went 12-4. Manning's response couldn't have been more accurate: "I really feel like it's a team award." I wonder if any QB has won the award finishing sixth in passing yards and fifth in QB rating and passing TDs. But this was a year when no single player stood out, so they gave it to a safe bet. I can't argue too much.

It wasn't a terrible pick, but it was terribly uninspired. If the voters were set on picking someone who didn't have great numbers, why not Miami's Chad Pennington? He took a team that was 1-15 last year and won the AFC East; He even had a better QB rating than Manning. Instead, the voters put him second. If his name was Chad Manning, he would be the League MVP.

For my picks, I use a few criteria. First, the player must have been on a team with a winning record; You can't be the MVP of the League if you couldn't lift your team over .500. Second, you have to have personally had good numbers; While there are plenty of intangibles in football, the numbers in the stats book are a strong measure. Third are the intangibles: Leadership, team exceeding expectations. Things like that. This those things in mind, these are my MVP rankings:

1) Michael Turner, RB, Atlanta Falcons. The Falcons were supposed to be mired in the swamp at the bottom of the tough NFC South for years to come. Instead Michael Turner, in his first year as a starter, led the team to the playoffs with the second-most rushing TDs, second-most rushing yards and most converted first downs in the League. What makes it more amazing is he did it against defenses putting lots of guys in the box trying to stop Turner, given the rookie QB in the Falcons' backfield.

2) Larry Fitzgerald, WR, Arizona Cardinals. Only twice did he have less than 50 yards in a game this season, he caught for 150 yards seven times, he caught at least three balls in every game, he led the league in receiving touchdowns, and he led his team to its first division title since long before they moved to Arizona.

3) Adrian Peterson, RB, Minnesota Vikings. Possibly my worst prediction of the year was that this man would have a sophomore slump this season. Peterson led the League in rushing and returned the Vikings to the top of the NFC North. He ran for 100 yards in 10 of his 16 games; Only his low TD number (10) kept him from my No. 1 spot.

4) Chad Pennington, QB, Miami Dolphins. The numbers weren't good, but what a turnaround. While experts were making excuses for Brett Favre's slow start to the season because of his late arrival in training camp, Pennington quietly led the Dolphins to the greatest turnaround in NFL history. Pennington finished second in the League in QB rating throwing only seven interceptions on the season, and only one in his final five games.

5) DeAngelo Williams, RB, Carolina Panthers. If the voters were handing out the award based on second-half performance, I don't know how Williams didn't get a single vote. In just his final eight games, he recorded 15 TDs, he ran for 993 yards and had over 100 yards in six of those games. On the season, he averaged 5.5 yards per carry; No one with over 200 carries had more.

6) Ed Reed, S, Baltimore Ravens. Another team leader who took a team with no expectations to the playoffs. When the games matter the most, Reed excelled: In his team's final six games Reed made eight interceptions, a category he led the League in.

7) Jon Beason, LB, Carolina Panthers. He was a beast all season, finishing third with 138 tackles and three interceptions. No one with more picks had as many tackles. And while the resurgence of Julius Peppers got most of the attention on the Carolina defense, it was Beason who locked up the middle of the defense.

8) Peyton Manning, QB, Indianapolis Colts. Manning had great numbers in his final nine games, throwing 17 TDs and 3 INTs in those games. He slips some for his incredibly slow start that put his team in jeopardy in the first place, and also because he has a strong team around him that was expected to contend for the Super Bowl.

9T) Matt Ryan, QB, Atlanta Falcons and Roddy White, WR, Atlanta Falcons. Few tandems have had a more surprising season than these two. With defenses playing one-on-one on the outside, these two took advantage with big play after big play. White's 88 catches were ninth in the League, and no one with more catches equaled his 15.7 yards/reception. His 88 receptions were the most by a Falcon since 1995.