Share All sharing options for: Utah rips 'Bama, stakes claim to No. 1 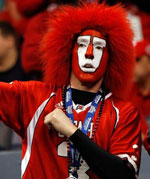 Yes, I know Utah won't win the mythical national championship since the absurd BCS system settled on Florida and Oklahoma as the two teams to play for the BCS title. But after watching the Utes dismantle Alabama, 31-17, in the Sugar Bowl, they have as much claim to the title as anyone.

The Utes are the only unbeaten team (13-0) and they whipped a Bama team that one-loss Florida struggled to beat in the SEC title game. And after watching Mississippi put up 47 points against Texas Tech, Oklahoma's 65 against the Red Raiders looks much less impressive. Tell me again why OU and Florida are playing for the title? After watching Utah and USC roll the last two days, it makes even less sense than it originally did.