McGwire's brother: I gave the him 'roids

Share All sharing options for: McGwire's brother: I gave the him 'roids 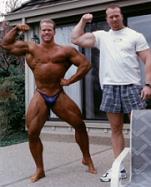 I almost feel sorry for Mark McGwire. First he cries before Congress. Then his baseball career is called into question and nearly disgraced. And now his own brother Jay is pitching a book in which he claims he gave Mark steroids. Jay knows a thing or two about the drugs: He's a bodybuilder and took them for years himself.

Mark is a man I think most would like to forgive because his reason wasn't nefarious-it was for survival. My bringing the truth to surface about Mark is out of love. I want Mark to live in truth to see the light, to come to repentance so he can live in freedom-which is the only way to live.

That and the potential for a big pay day for a tell-all book about his much more well-known and richer brother.

I wonder if Lance Armstrong has a brother . . .