Share All sharing options for: Matt Ryan has gay moment with Carson Daly 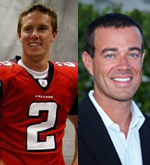 Atlanta Falcons quarterback Matt Ryan (left), he of our Outsports NFL All-Hot team for 2008, is apparently a new spokesmodelperson for Axe Hair. He was on Carson Daly's show Wednesday (Carson Daly still has a show?) and apparently the two of them got into a lovefest, apparently consisting mostly of Daly drooling over Ryan (and who wouldn't) and his hair.

"This may be a bit of a gay moment, but your hair looks beautiful," Daly said.

While Falcons fans are "eww"-ing and "gross"-ing, declaring Carson Daly gay and Matt Ryan a god, I'll be curious to see how many of them go buy Axe Hair. From dog-killing ghetto thug with a Nike contract to metrosexual hair pimp with a bodygrooming contract; Oh how Atlanta's quarterback position certainly has transformed in the last two years.

Hopefully the show's site will have the video up eventually.