Ever wanna be a Dallas Cowboy?

Share All sharing options for: Ever wanna be a Dallas Cowboy? 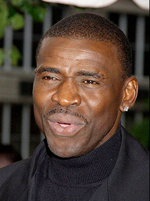 Ever have a dream of making it on an NFL team? Working with the likes of Jerry Jones, Deion Sanders and other Cowboys greats? How about just seeing Terrell Owens in the shower? All this can be yours if you can win a new reality show on Spike TV hosted by Michael Irvin this summer that will send one lucky man to the Dallas Cowboys training camp to compete for a spot on the team as a wide receiver or a defensive back. Said Irvin:

After the tumultuous year for the Cowboys in 2008, I figured this will be just what the Cowboys don't need at their training camp: Another distracting sideshow act. But Irvin's a step ahead of me.

This is nothing like Hard Knocks was last summer. That was invasive. We are not. We won't change one thing the Cowboys do to prepare for the season except we'll find them a player.

Well, with Pacman Jones gone and T.O. aging quickly, they certainly need help at those two positions, so maybe it'll all work out for them.

I'd love to see a gay man get on the show. That'd mix things up really nicely. It'd give us a glimpse of the issues with having a gay man in a pro football locker room. If only Esera Tuaolo wasn't a lineman.