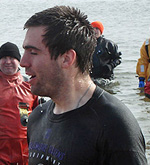 Baltimore Ravens rookie quarterback Joe Flacco was among 11,000 people who plunged into the icy Chesapeake Bay this weekend to raise $2 million for charity in the Polar Bear Plunge. Alas, he wussed out and did not do the plunge shirtless. He also did not disclose if there was "shrinkage," ala George Constanza.

"It's a great cause to come out here, and it's great to see all the people doing it," said Flacco, whose Ravens made it to the AFC Title Game. "It's awesome to see so many people out here supporting us," he added. "That's what it's all about is going out and having fun."

These dives into icy waters have long been a tradition in places like Russia, where people plunge in wearing little except a bathing suit. And last year's plunge in Maryland featured guys not afraid to bare almost all, though I could have gone without seeing this awful leopard spot number on this guy.