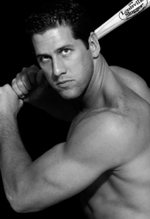 Nine years after John Rocker was suspended from baseball for racist and anti-gay slurs, he's still at it. Before allegedly being tossed from the grand opening of a new W Hotel in Buckhead near Atlanta, Rocker reportedly called local sports talk show host Steak Shapiro a 'Jew faggot.'

"[Faggot] is one of his favorite terms and he used it multiple times," Shapiro told the Southern Voice. "His exact words at least three times [were], ‘You Jew faggot.' He is a pathetic guy."

Rocker doesn't deny it in an interview with Deadspin. In fact, he says he loves using at least one homophobic slurs:

Deadspin: Did you call him a faggot?
JR: I don't know. Maybe. I can't remember.
Deadspin: Okay...did you call him a "motherfucking cocksucker"?
JR: Yeah, I definitely did. I like saying that. I say that a lot.

I don't think Shapiro deserved to be called either a Jew or a faggot; There's no need for that. On the flip side, he probably deserved a good lashing from Rocker. By all reports, Shapiro has been merciless about Rocker over the years, as so many big mouths on radio are with easy targets. So while Rocker went too far with the name-calling, I wonder how much of the tongue lashing Shapiro did actually deserve.

Still, Rocker could have gone a couple ways after his nasty incident nine years ago. He could have gone the way Tim Hardaway did, trying to make amends. Or he could just keep being a raging asshole. Unfortunately, he chose the latter.

Via Queers United and Deadspin