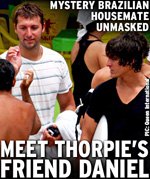 Australian swimmer Ian Thorpe has denied he is gay, but has said that he is in love with someone from another country. So, the revelation that Thorpe was seen frolicking on a Brazilian beach with Brazilian swimmer Daniel Mendes -- someone he has lived with in Australia for three years -- is just one example of an awesome heterosexual friendship.

Sydney Confidential can reveal that Mendes has been living with Thorpe for the past three years as his housemate. According to Thorpe's manager David Flaskas, the men were introduced through Thorpe's former coach Tracey Menzies while Thorpe was training for the 2008 Olympics. They became training buddies before their friendship developed.

The photos of the men were taken at the end of a month-long vacation in Brazil. The pair flew over in late December to celebrate Christmas with the Mendes family after first celebrating with Thorpe's family in Australia.

It was also disclosed that "that Mendes had accompanied Thorpe to two events in the past 18 months - the 2007 Australia's Next Top Model finale and the 2008 MTV Awards." Yep, those are two places one takes a "mate." Any single woman would give her eye-teeth to get an invite to such events from a guy like Thorpe.

The Defamer, Australian version, had a great snarky summation of what we know:

So in conclusion, I can't really understand why people are making such a big deal about Ian Thorpe being VERY GOOD FRIENDS with Daniel the Hot Brazilian Swimmer. Maybe the Daily Telegraph is trying to send a message to the youth of today that social networking sites like Facebook and MySpace are no substitute for real mateship which sees pals going on holidays together/spending time with each other's families/sometimes sharing a bed when it gets really cold and there's not enough blankets in the house? That must be it. In which case, I hope we all find a Daniel the Hot Brazilian Swimmer one day.

I don't care whether Thorpe ever comes out or really is straight, but his denials and awkward language (he called his love "they" last year, then used "she" in another interview) strain logic. He has retired, has made a great living from his championship swim career, so why is he being coy? If he and Mendes are a couple, just say it already. Diver and fellow Aussie Matthew Mitcham never backed down from discussing his partner, Lachlan Fletcher, and Mitcham is still an active Olympian. Based on these photos, Thorpe is a long way from being in shape to compete again.

Update: Ian Thorpe reiterated again he is not gay.