The 'pansification' of the NHL

Share All sharing options for: The 'pansification' of the NHL 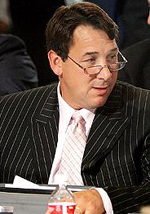 CBC hockey commentator Mike Milbury is in hot water with a gay-rights group over his coining of the term "pansificiation." He has used it a couple times on air to describe what will happen to the NHL if the league kowtows to calls for a ban on fighting. Egale Canada is picking up the fight, saying that the term is an attack on gay people. But CBC spokesman Jeff Keay says they won't be doing anything about it, and that the gays are 20 years behind the times . . .

"The point is, it was no way intended to be a reflection on or offensive to gay people," Keay said. "I think the colloquial use of the term was something they didn't associate with gay people. The way the language evolves over time, 20 or 30 years ago it would have been seen, reasonably enough, as a direct slur against gay people. But I think with usage now, I'm not sure the association is so immediate."

"Words like pansification just further the stereotype and perpetuate the homophobic stereotype in our society," she said yesterday.

The network's defense of the term seems a bit odd to me. Canada is supposed to be a place where you don't have to hear stuff like this. And surely there are a dozen other terms they could come up with to describe the sentiment without using a derogatory term. My guess is they'll cave at some point; It just seems like a no-win fight for them.