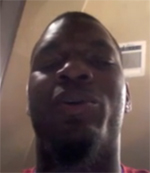 The Dallas Cowboys slapped tight end Martellus Bennett with a $22k fine for his cuss-word and epithet-filled rap that was yanked quickly off of Youtube, which is about a dollar for every person who watched the video. Now Bennett has a new rap "apologizing" for the first rap:

Why they hatin on me, it was just a song
I was only rappin, I didn't do nothin' wrong
But the media, they tried to do me wrong
But it's OK y'all, ‘cause it's still on

Heavy, heavy emphasis on the quotes around the word "apologizing." Among non-apology apologies, this was a classic. He's sorry if anyone was hurt by it, but if you were hurt by it, you just took it wrong and it's your fault that he's getting into trouble.

I wasn't using guns, it was all in fun
I mean come on dog, it was just asong
The one crazy verse, it could have been worse
I mean I did curse, but I didn't see a hearse.

I mean, I'm 21, which is no excuse
It did make the news, but the way they spoke
Man it wasn't true
Now they talkin bad about my attitude.

And he breaks from his rapping for a message to his fans:

I just want to say I'm sorry to all my fans, my people out there who supported me through the whole thing. Dogs made a bigger deal out of it than it really was. But, hey, I'm here for the fans.

I'm sure the guy didn't mean to hurt anyone, but be a man Martellus and step up. When you wear your Cowboys garb and say "I got iphone money, Jerry Jones' money," and then you go off on your cuss- and epithet-laden rap, you gotta know what's coming. So take responsibility for your racial and anti-gay epithets. Then maybe you'll get a little more respect from your "dogs."