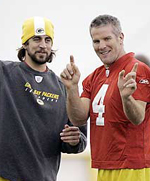 Green Bay Packers quarterback Aaron Rodgers was live on the Michael Irvin Show today from the Super Bowl's radio row, where the show has been broadcasting from all week. Irvin and his partner Kevin Kiley wasted no time jumping right in with questions for Rodgers about Brett Favre. Rodgers said he has tried to reach out to his former mentor since Favre was sent to the Jets six months ago, but Favre won't return his calls. Sounds more like one of my past jilted lovers than an ex-teammate.

Irvin and Kiley were describing Rodgers' body language and said over and over that Rodgers was physically disturbed by Favre's personal rejection of his former back-up. The two hosts were actually consoling Rodgers on the air, almost like they were his doting parents.

Transcript after the jump.

Irvin asked Rodgers if he had spoken to Favre since Favre went to the Jets, and Rodgers said no. Irvin then asked if Rodgers had reached out to Favre, and Rodgers said yes. That's when Rodgers told the two hosts he really didn't want to talk about all of that because it made him feel uncomfortable.

Irvin: What was the relationship like with you and Brett?

Rodgers: I was under the impression that it was good.

Irvin: Why would you say you were under the impression?

Rodgers: You know what, we got along very well. Especially the third year. But I just wish at some point he had reached out to me.

Kiley: In what way? What does that mean, reach out to you?

Rodgers: Talk to me.

Kiley: He never talked to you?

Irvin: When you were playing together, how much speaking did he do with you?

Rodgers: It was me and him. The last year, we had no other quarterback on the roster.... We joked around with each other every day.... And to not have talked to him in over a year is disappointing.

Kiley: Why do you think that is?

Rodgers: I'm not going to speak for him.

Kiley: ... You must say to yourself, why doesn't Brett speak to me. What could it possibly be? ...

Rodgers: I don't know. That's a question for him. I'm not going to put words in his mouth.... When we lost to the Giants [in the 2007 NFC Championship], we left as friends, and I haven't talked to him in a year....

Irvin: Why will you not reach out to him?

Irvin: So you called him and he did not call you back.

Kiley: ... I can see Aaron is struggling with this, and if this was television you could see he's uncomfortable with these questions.... Was he popular on the team, there were reports that he was a little separate from the team, did you feel that when you guys were making that run for the NFC title, that he was separate from the other players?

Rodgers: I really don't want to go into that.

Favre, it seems, is not quite the man we were all lead to believe he was. It's pretty sad that a future Hall of Famer would be such a child that he wouldn't return the call of a twentysomething kid stuck in the middle of Favre's tantrum. I've always felt Favre was a selfish me-first player who cared more about his MVP awards than his team's success. This just adds more fuel to that fire.