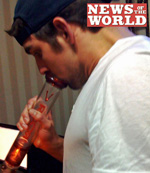 The British tabloid The News of the World is getting attention for its "scoop" that shows American swimmer Michael Phelps smoking pot at a party in Columbia, S.C., in November. The story was given a prominent link via red type on the Drudge Report. (Phelps has now apologized; see below)

This is the astonishing picture which could destroy the career of the greatest competitor in Olympic history.

In our exclusive photo Michael Phelps, who won a record EIGHT gold medals for swimming at the Beijing games last summer, draws from a bong.

The glass pipes are generally used to smoke cannabis.

The article then goes on to describe Phelps' appearance at a party with students from the University of South Carolina, where he smoked pot, drank like a fish, got wasted and generally made an ass of himself.

Our source said: "You could tell Michael had smoked before. He grabbed the bong and a lighter and knew exactly what to do.

"He looked just as natural with a bong in his hands as he does swimming in the pool. He was the gold medal winner of bong hits. Michael ended up getting a little paranoid, though, because before too long he looked like he was nervous and ran out of the place."

The story goes on to say that Phelps' representatives begged the paper to not run the pictures, offering all sorts of exclusives, including having Phelps write a regular column. The fear is that Phelps could have run afoul of Olympic anti-doping laws.

This really seems like much ado about nothing. Phelps is 23, drinks and smokes pot. Big deal. It was encouraging that many commenters on the News story are taking a who-cares attitude. It also is unclear how smoking pot in November, an offseason for swimming, could disqualify Phelps from any competition unless he actually failed a drug test. I doubt the News' photo would be admissible as evidence.

David Howman, executive director of the World Anti-Doping Agency, told AP that only athletes who test positive for marijuana during competition are subject to penalties. "We don't have any jurisdiction," Howman said. "It's not banned out of competition. It's only if you test positive in competition."

The International Olympic Committee added marijuana to its banned substance list in 1998, even though it is not considered "performance enhancing." It was just another case of hysteria from a body that has no problem accepting money from alcohol companies, whose products lead to death, disease and wrecked lives. The IOC considers pot a "minor" drug, so first-time offenders get off with a warning.

My guess is that Phelps' reps are more concerned with his image as a spokesman for corporate America, which might suffer if he gets a reputation as a pot head. Yet Phelps had a DUI when he was 19, and that didn't seem to hurt him. As for me, this news makes me think no better or worse of Phelps. I'm more turned off by those sideburns and chin pubes he has in that picture and would buy him a razor.

Just curious: There is some debate over whether the guy in the photo actually is Phelps. It does look like that to me, but I am not 100% convinced. What do you think? (Note: This was written before Phelps' apology).

Update: A day after the story broke, Phelps issued this statement:

I engaged in behavior which was regrettable and demonstrated bad judgment. I'm 23 years old and despite the successes I've had in the pool, I acted in a youthful and inappropriate way, not in a manner people have come to expect from me. For this, I am sorry. I promise my fans and the public it will not happen again.