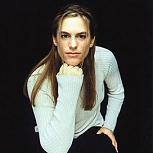 Pro tennis player Amelie Mauresmo rarely talks about her sexual orientation, so I was a little surprised to see a two-page article about her in the latest issue of The Advocate. But not as surprise, it seems, as Mauresmo was to find out she was doing an interview with the gay mag. Douglas Robson writes:

I'd been pursuing Mauresmo for an interview for the better part of 20 months, so I was pleased and somewhat surprised when word came that she'd finally agreed to do it - she rarely talks about her sexual orientation anymore. But as it turned out, my request had been miscommnicated: She thought the interview was for another publication, not The Advocate. As we sat down in the players' garden at the U.S. Open in August and I asked why she'd decided to chat, she looked confused and startled. When the tan, fit Frenchwoman, dressed in shorts and a sleeveless athletic top, finally understood what was up, she leaned forward in her chair. I figured she was about to stand, politely decline, and leave.

"So what do we do?" she asked. I said it was up to her. She sat back and barely hestitated. "Yeah, whatever."

Mauresmo's reticence to talk about her personal life is clear in the article; She actually refuses to answer the interviewer's questions about whom she's dating. What does come through is that she really doesn't want to talk about being a lesbian pro tennis player. Unlike Martina Navratilova (who's certainly had plenty of time to adjust to the idea), it seems Mauresmo is still building her legacy as a player and doesn't want her sexuality to deter that. Hopefully she'll open up a little more once her playing days are over.

You can watch Mauresmo in the Australian Open starting Jan. 19.