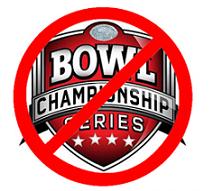 This story from Yahoo proves conclusively that college football's BCS system sucks and that the two teams that get to play in the title game are there for reasons other than their on-field success. Some voters in the Harris Interactive Poll, which helps determine BCS rankings, NEVER WATCHED UTAH PLAY! The same Utah team that finished 13-0 and whipped Alabama (formerly top ranked) in the Sugar Bowl.

"I did not see them play [in the regular season]," Bobby Aillet said.

"I don't recall if I saw them play specifically during the regular season," David Housel said. "I don't remember a specific game. ... I wouldn't say I probably was wrong. I was wrong," said Housel, a former Auburn athletic director who had the Utes ranked 10th.

That is amazing and proves that this Thursday's Oklahoma-Florida game will not determine the national champion and is more of a popularity contest. There is no way a Sooner fan (whose team lost by 10 to Texas on a neutral field) or a Gator fan (whose team lost at home to Mississippi) can argue otherwise; just accept your gift and stop trying to justify it with illogical arguments. Unbeaten Utah has more claim to the title than anyone else.

I'll let Dan Wetzel of Yahoo have the last word:

How did a team this good wind up a lowly sixth in the final BCS standings?

The answer speaks to the illogical way college football crowns its champion, a system where perception, reputation and media hype can mean more than touchdowns and tackles.

Utah could do the latter as well as anyone. It was non-competitive in the former - suffering from tired stereotypes, a lack of television exposure and the mind-numbing power of group think.

Even by the absurd standards of the BCS, having voters not bother to watch an undefeated team play a single game is a new low.

Whether Utah deserved to be ranked No. 1, 2 or 25 isn't the point of this argument. The Utes deserved to have voters at least see them.