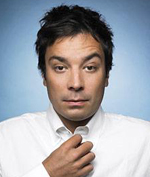 Unfortunately for people who enjoy comedy and have a good sense of humor, Jimmy Fallon hosts the Late Night show on NBC. Yesterday he decided to go after the Gay Games' choice of Cleveland to host the 2014 Games:

It was announced yesterday that Cleveland, Ohio, will host the 2014 Gay Games. That's weird, I thought New York always hosted the Tony Awards. But maybe I'm wrong. When they heard that the Gay Games were in Cleveland, Ohio, San Francisco was like, uh, hello!

Seriously? Is it 1997? Or is Fallon just stuck there? I'm all for picking on anyonen for humor's sake, but these jokes are so lame. Who equates a gay event with the Tonys? But even more ridiculous, who thinks San Francisco is the center of the gay universe? It hasn't been since Fallon was about 12. The rest of his monologue was just as out-of-touch and unfunny. Good thing they have an "applause" light for the audience, or you'd hear crickets chirping.

Maybe Fallon should try this one on his next show: "Hey, I saw the monologue of Jimmy Fallon's show recently, and I thought it was Saturday Night because he obviously brought over the same terrible writing he had on SNL."