Share All sharing options for: The politics of NFL teams lean Republican 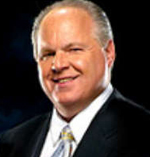 With all the kerfuffle over the reported bid by Rush Limbaugh to become a minority owner of the St. Louis Rams, one thing has gotten lost -- his political views would fit in well with the current owners of the 32 teams. Robert Schlesinger in U.S. News writes that NFL stands for "Not For Liberals."

The [Center for Responsive Politics] combed through contributions to federal candidates and political committees from 1989 through 2009, and tallied all contributions from NFL team owners, executives, players, coaches, and so forth (the teams themselves are of course legally forbidden from making contributions). According to the center's figures, NFLers contributed $6.9 million during that 20-year span, of which 78 percent ($5.45 million) went to Republicans and 21 percent to Democrats ($1.48 million).

This list is not a surprise since most businesspeople tilt Republican, as do I suspect a plurality of players (given their high salaries). Limbaugh, though, has gotten tons of attention for his bid more because of his inflammatory rhetoric than for how he votes. Mark Cuban, the outspoken owner of the NBA Dallas Mavericks, says on his blog that the NFL can't allow Limbaugh to own a piece of an NFL franchise.

What they should be terrified about , and why they should keep him out, is what he might say AFTER he was an approved investor in the St Louis Rams. ...

Given that we will never know what the "next big issue " in this world that Rush will be discussing on his show is, its impossible for the NFL to even try to predict or gauge the impact on the NFL's business if something controversial, or even worse yet, something nationally polarizing happens. There is an unquantifiable risk that comes with the size of Rush's audience. The wrong thing said on the show, even if its not spoken by Rush himself, about a sensitive national or world issue could turn into a Black Swan event for the NFL. Thats a huge risk that is not commensurate with the value a minority investment in a franchise brings.

This isnt about Free Speech. Its about the NFL protecting their business.

Limbaugh has every right to try and own part of the Rams. The NFL, being a private entity, has every right to reject him on virtually any grounds; that's the way this business works. NFL Commissioner Roger Goodell has already signaled his displeasure with a Limbaugh bid.

Ultimately, I don't think fans care about the political views of their favorite teams. Will a Republican Patriots fan suddenly start rooting for the Chargers instead? Or a Democratic Cowboys fan start to wear Eagles green?

Hat tip to Mike Florio of Pro Football Talk who has been all over this story.