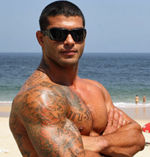 Quinn Wolfe goes to my gym in the Silver Lake section of L.A. Quinn and I somehow got on the topic of how hot some Mixed Martial Artists are. He started giving me his list, then added, "But I'm straight. Will that hurt my credibility?" It will only enhance it, I said, giving a unique perspective unsullied by lust (OK, maybe a little lust).

Quinn, 25, teaches piano, does occasional studio work and has been following MMA since he was 8. I love his list and his comments about each fighter, and would love to know what you think of his tastes. He will start blogging for us on all things MMA.

By Quinn Wolfe
Given the survival advantages offered by a sloping forehead in combat sports, it's unsurprising that most Mixed Martial Artists straddle an aesthetic line between a Cro-Magnon and a cabbage.

However, in recent years, a number of notable exceptions have emerged, due in part to the skyrocketing popularity of MMA (and its consequent ability to draw athletes from a broader section of the gene pool), and due probably in larger part to the fact that modern MMA fighters, unlike in the early days of the UFC, no longer consider blocking elbows with one's teeth a valid battle strategy.

My only criterion really is handsomeness of face, although I'm making an attempt to factor in bulge where photographic evidence is available (I'm discounting the hearsay of MMA groupies on the message boards). Since nearly all my picks fall below heavyweight, it's pretty much a given they'll have nice bodies. However, minus points for any idiotic/racist tattoos. 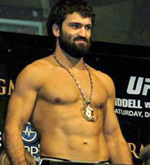 7. Andrei Arlovski
The only heavyweight to make the cut, Andrei Arlovksi's furry, Eastern European charms aren't for everyone. The fact that he's perpetually on the verge of a mullet and his numerous appearances on the Jerry Springer show (I'm not kidding) don't help his case.

6. Roger Huerta
The 26-year-old Huerta survived a brutal upbringing (didn't they all? I've yet to read a fighter interview that started, "Well, both my parents were Doctors, but I felt getting punched in the head was a safer career path") to achieve above average success in the UFC.

Holding the distinction of being the first Mixed Martial Artist to grace the cover of Sports Illustrated, it became apparent after Huerta was knocked from lightweight title contention by ESPN commentator Kenny Florian that Huerta's sex appeal outstripped his talent.

Recently, Huerta announced his intent to ditch the 4-oz. gloves and pursue a more respectable career path as a Telemundo soap star.

5. Yoshihiro Akiyama
In 2006, Akiyama was involved in an illegal lubing controversy in Japan's K-1 HERO'S promotion. I don't want to elaborate and spoil the fun.

Universally referred to among MMA fans as "Sexyama," Akiyama has bared his chest for a number of well-known magazines and major corporate ad campaigns, including Men's Health and Nike.

His underwhelming UFC debut against Alan Belcher makes his talent somewhat more disputable than the other entries in my mind, but thankfully, talent is completely irrelevant.

4. Brock Lesnar
For those of us who got a hard-on every time The Thing made an appearance in the "Fantastic Four," we have his frothingly homophobic real-world counterpart, Brock Lesnar.

What a man with an enormous phallic symbol (MMA wags refer to it as a penis) tattooed on his chest (pointing toward his mouth, I might add) has against gays is anyone's guess. Actually, I really only included Lesnar in the hope of pissing him off if he ever by random chance sees this list.

3. Ricardo Arona
A former light-heavyweight contender, Arona is regarded outside the cage equally for his beauty and his preposterous excuses following losses. From claiming a rare tropical disease ruined his performance against Rameau-Thierry Sokoudjou (to be fair, Arona is from a tropical region) to insisting he was knocked out by an invisible illegal head-butt from Quinton Jackson, Arona at least makes up for his total lack of class with creativity.

Although Arona claims to be straight, he has publicly testified more than once to his appreciation for the Rear-Naked Choke.

2. Mauricio "Shogun" Rua
A part-time model in his native Brazil, "Shogun" Rua (pronounced Hoo-Ah, like that obnoxious Al Pacino character in "Scent of a Woman") once held a Full Mount on the entire light heavyweight division. After a series of underwhelming performances in the UFC, Shogun looks to revitalize his career when he fights UFC light heavyweight champion Lyoto Machida at UFC 104 this October.

Shogun enjoys hiking, Cabernet Sauvignon, and soccer kicking his opponents in the head when they're on the ground.

1. Georges St. Pierre
Be honest. Who wouldn't have wanted to bone Jean Claude Van Damme if a quart of ignorant hadn't poured out every time he opened his mouth? With all Van Damme's physique and none of his repeat accusations of sexual assault, baby-face St. Pierre's consistently genial attitude toward fans and the press is as endearing as his mumbly English.

OK, what do you think of Quinn's tastes? Would you want him as your wingman at a club? For me, I agree with Arona, Akiyama and St. Pierre, but Arlovski has too much of a Rasputin vibe going on.