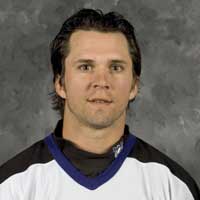 It's not as sexy as it sounds, but during practice Tuesday, the Tampa Bay Lightning players had a "strip shootout." Basically, anytime you missed a shot you had to remove an article of clothing. But because hockey players wear so much gear, even the worst shooter -- Martin St. Louis -- never showed much skin.

St. Louis, in order, discarded his helmet, elbow pads, gloves, jersey, both leg pads, both skates, his leggings and socks before finally scoring. Most entertaining was watching St. Louis try a breakaway while wearing one skate, and then while wearing a pair of sandals from the locker room after he discarded his second skate.