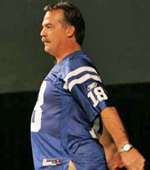 The Tennessee Titans are 0-6 and are coming off a 59-0 loss to New England, so Titans fans are not a happy bunch. They are less happy after Titans coach Jeff Fisher donned a Peyton Manning jersey at a fundraiser Tuesday because he "wanted to feel like a winner." Manning plays for the arch-rival Indianapolis Colts, who are unbeaten.

Fisher wore the jersey to honor guest speaker Tony Dungy, the former Colts coach. And the crowed roared at Fisher's joke. Titans fans, though, are up in arms. And Fisher today issued a non-apology apology where he called out the fans.

"It was for a very, very worthwhile cause, charity," Fisher said. "I was introducing Tony, just having fun with it and I really apologize if I offended anybody, but if you're offended over the nature of that type of thing, then I think you need to rethink things. This is a very worthwhile and needy benefit and I was honored to be there. ... I'm sorry if I offended anybody but if I had to do it again, I would do it again."

"If he's catching any heat for that, that's pretty ridiculous. That's the problem with giving speeches now, or introducing somebody: if you try to be the least bit humorous, it always comes back to make a story out of it. They want you to be a boring speaker or a boring introducer. It's a guarantee the crowd probably got a big laugh out of it. I'm sure Coach Dungy did, too. It's pretty funny to me, but I don't think he should have to be apologizing for it."

I'm with Fisher on this. The Titans are on a bye week and he was speaking at a fund-raiser. Do fans expect him to sit in his office crying all day, or studying more film? He was been a very successful coach and anyone who thinks he's happy being 0-6 is crazy. A lot of fans need to get a life. If Manning wore a Bill Belichick hoddie at an event, I would think it hilarious.

That said, Fisher did burn some bridges with the fan base and this could be a sign that he is on his way out and doesn't care. If Fisher is fired at season's end (something owner Bud Adams has not ruled out), the Cowboys would snap up Fisher faster in a second. Then we'll see who's laughing last.