Share All sharing options for: Brad Childress does drag 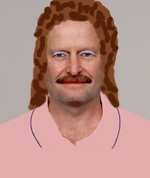 If the Vikings are looking for a scapegoat for their loss at Pittsburgh on Sunday (and they wouldn't dream of calling out No. 4), they may want to look to a female flight attendant with a mustache. On their flight from Minnesota to Pittsburgh, Vikings head coach Brad Childress reportedly donned a wig, nylons and some lipstick and boarded the flight. He was apparently looking to make a point to his players about treating flight attendants well. The message, apparently, was, "It's just a game." What followed was "just a loss."

I wonder how many slaps on the butt he took for that one.