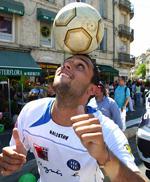 A Paris Foot Gay player at a Pride event.

A soccer club composed of Muslims refused to play a scheduled league game this week against a gay-oriented team from Paris, saying it would clash with its religious beliefs, the gay French site Tetu reports. (The article is available only in French, but online translators and English wire service versions confirmed the story).

"Sorry, but from the name of your team, we can't play against you," read an e-mail sent by the Muslim team Creteil Bebel to Paris Foot Gay the day before the game. "Our beliefs are far more important than a football match."

"It's unbearable and intolerable" said Pascal Brethes, president and co-founder Paris Foot Gay. "This explicit refusal to meet with us is a first in the league in which we operate. ... Many religions are represented in our team. There are Christians, Jews and Muslims, including our coach, who is wounded by this rejection. "

The local league the teams play in (which is an area rec league) condemned the move by the Muslim team and is considering action. SOS Racisme, a non-governmental anti-racist organization also condemned the action, as did Bertrand Delanoë, the openly gay mayor of Paris. But Tetu's got a followup response from the a spokesman for Bebel, who refused to back down.

"As a practicing Muslim, I do not subscribe to their ideas. Now, if there's anyone who felt offended or hurt, I want to apologize. "

Brethes was perplexed by this reaction, asking, "What would happen if teams refused to meet with a team of practicing Muslims?"

Brethes said this openly confirms the homophobia the team often enounters in more subtle ways, even though there are also straight players on the team. This is homophobia pure and simple and Bebel needs to be sanctioned and kicked out of the league. Let them play only against people as prejudiced as they are.