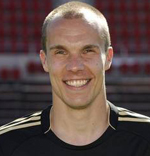 A sad story out of Germany -- Robert Enke, a goalie for Hanover and likely to be the national team's goalie in the 2010 World Cup, was killed when he threw himself in front of a passing train. He was 32. His wife said that Enke suffered from depression. He left a suicide note in which he apologized to his family.

German newspapers said Enke - already a quiet and reserved individual - was a troubled man ever since his biological daughter, Lara, died at age 2 in September 2006. She suffered from a rare heart malformation. Another factor, they reported, was the loneliness, the uncertainty, of a goalie's situation.

On Wednesday afternoon, his widow Teresa, said that Enke was first treated for depression in 2003. "When he was acutely depressive," she said, "he lacked motivation and hope. I tried to be there for him. I said football is not everything, there are many beautiful things in life, it is not hopeless."

Other reports say that Enke kept his depression hidden, fearing that exposure would mean the end of his soccer career. Said his wife Teresa:

When he was acutely (depressed), it was difficult. Difficult above all because he didn't want anything to get out. That's the way he wanted it, because he was terrified of losing his sport.