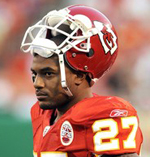 Do you believe in karma? If you do and you're a Cincinnati Bengals fan, you may want to shield your eyes from the rest of the season. The Bengals have signed running back Larry Johnson as an "insurance" policy against injuries to their other running backs, including Cedric Benson who's nursing a hip injury.

On the face of the deal, it's a smart move. Johnson still has juice and could fill in nicely if he needs to. Getting him in now, when you don't need him and he can learn the offense, is a great idea. But I just have this nagging feeling that prognosticators could look back at this six weeks from now and say this was somehow what sent the Bengals on a downward spiral.

The Bengals certainly have a favorable schedule to make the playoffs. Four of their final seven games come against teams with 2 or fewer wins. If they just win those, they will have a home playoff game. And don't think part of this isn't Larry Johnson eying the Bengals' Dec. 27 game: at home against Kansas City.