The debate: How gay is MMA?

Share All sharing options for: The debate: How gay is MMA?

It has been interesting to see mainstream writers wrestle with whether mixed martial arts is "gay." The Daily Beast has had two somewhat-opposing columns on the subject in the past two weeks, the most recent by Sam Sheridan, himself a fighter. Writes Sheridan:

Having fought and trained a little, let me assure you that there is nothing sexual going on-fighters are in survival mode, the "fight-or-flight" instinct is in full swing. It's kill or be killed, intensely claustrophobic, and a mental and physical war of counter and bait, deception, and speed. A fighter's grappling style reflects his body type, his temperament, his training and his thoughts, just like an artist's. There are thousands of variations on attacks and defense, "the ground game" is hard to appreciate at first, but worth the study. Is it homoerotic? Sure, if you want it to be. But, as Freud said, sometimes a cigar is just a good smoke. Of course, to those boxers and boxing promoters who don't understand and are threatened by MMA, homophobia is the last refuge of the scoundrel.

Sheridan was responding to another Daily Beast post (in which I was quoted), by Thaddeus Russell, in which he wrote:

Recently, gay bloggers, homophobic critics of MMA, and even straight fans have declared that one of the great appeals of the sport is its homoeroticism. They note the large number of gay men and straight women who have become fans of MMA and attribute it to the appeal of the nearly-naked hard bodies of the fighters and the intimate, often pelvic techniques of Brazilian Jiu-Jitsu, the favored grappling discipline in the sport.

Sheridan says that it's the nature of MMA (where the "fights continue if the combatants fall to the ground") that give it its gay vibe. And some of the terms such as "rear naked choke" clearly can be several ways. It's a sign of the growing popularity of the sport and the increased acceptance of male-to-male sexual imagery that discussing MMA and gay in the same sentence is becoming fairly common.

For example, I easily found this YouTube clip where a couple of guys and a woman titter like Beavis and Butthead as they watch slow-motion replays of what could be construed as one MMA fighter kissing another. They seem more fascinated than repulsed:

You can also go to the MMA Fix website, which regularly posts its "homoerotic photo of the week:" 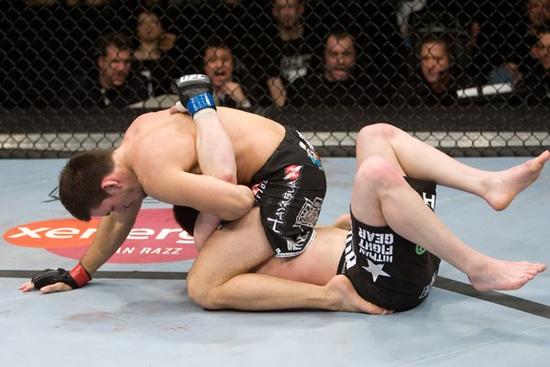 I think homoerotic is a much better term for MMA than gay. I agree with Sheridan that anyone in an actual fight is not viewing his opponent as a potential sex partner; it's hard to have sexy thoughts when someone is trying to pummel you into submission. And I would guess that the percentage of MMA fighters who are gay roughly mirrors the percentage in society as a whole.

But there is an undeniable homoerotic aspect. This has always been true of certain sports -- one that feature the body (bodybuilding, gymnastics, swimming) or ones that feature some form of domination (wrestling, football, rugby, MMA). I leave boxing out of this since I have never seen it argued that watching someone punched repeatedly in the face is sexy.