Share All sharing options for: Repressed homosexuality in Big Fan 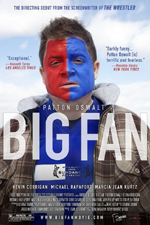 I stumbled across a review for the film Big Fan today. I remember hearing about it when The Wrestler came out, as Robert Siegel wrote both scripts. The film's been out since August, but it barely made a blip on any radar screens; It broke the top 50 in box office receipts just one weekend. But the review I saw today makes me more intrigued than ever to see it.

The film is about a hardcore New York Giants fan, Paul. Blue-collar guy. This reviewer, Kim Nicolini, ties the fan's intense love for the Giants and their star quarterback to the protagonist's repressed homosexuality.

In telling Paul's story, Big Fan is an incredibly tender, painful, and tragic look at the state of masculine identity, social pressures of masculinity, and how masculinity relates to homophobia and class in America via the seemingly heteronormative industry of pro football.

I'll definitely be renting Big Fan to find out if I see the same thing. It's not often the NFL allows the use of their brand and team names, so I'm hoping it's something special.