Share All sharing options for: France cheats to qualify for World Cup 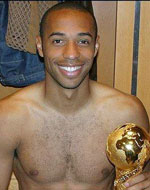 And you thought there was controversy over Bill Belichick going for it on 4th-and-2. That's nothing compared to the outcry in the soccer world after France qualified for next year's World Cup by beating Ireland, 2-1, in an elimination game when Thierry Henry used his hand to help score the winning goal. For you soccer novices, only goalies can use their hands.

What's worse is that Henry admits he used a handball but blamed the ref for missing it. This is so big the Irish prime minister asked for a replay of the game and said he would bring the issue up with French President Nicolas Sarkozy. Americans have nothing on international soccer fans when it comes to passion and blowing things out of proportion.

"We were robbed" said the Irish Star, "Le Cheat" added the Irish Mirror, while the Irish Sun splashed with the "Hand of the Frog".

A Facebook page entitled "We Irish hate Thierry Henry (the cheat)" also drew hundreds of comments, including a call for an Irish boycott of French goods.

In a twist, France's gym teachers (yes, there is a gym teacher's union in France) ripped the French soccer federation for not condemning the handball.

The sports teachers also said they objected to statements from coach Raymond Domenech and some players that sent the message that "the most important thing in sport is to win." "All these comments are unfortunately linked to a 'very modern' philosophy stipulating that in all areas, including sports, the end justifies the means," the union said.

Of course, one solution would be to allow instant replay for situations like this, a call that has increased among soccer commentators. We have the technology and this would allow obvious mistakes to be overturned and make the outcome valid. The NFL replay system, while not perfect, does go a long way in fixing up referee errors. But I imagine soccer, excuse me, "football" purists will have some dopey reason to oppose technology, but don't trying selling that argument in Ireland today.

Video of the handball and Henry admitting it: