Share All sharing options for: Did Drew Gooden call fan a 'faggot'? 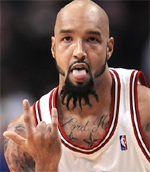 A Los Angeles Clippers fan is accusing Maverick Drew Gooden of calling him a "faggot" after the two teams clashed at the Staples Center on Halloween. Mavs owner Mark Cuban say he's going to handle the issue privately. Really? Cuban has the reputation of taking everything public...and he's going to keep this one private? What if he realizes Gooden did use the slur toward a fan? Does he get to keep that private? Because there's no tape, I'm sure Gooden will tell Cuban he didn't say it, and that will be music to Cuban's ears.

Some people will dismiss this as a he said/she said incident. Given Larry Johnson's tirade last week, it's more than that to me. Athletes and coaches have been getting away with the use of this word for years. I personally believe the fan (afterall, why would a straight guy bring this up if it didn't happen?), so I see this as another example of an athlete getting away with calling someone a faggot. It's not right, and Cuban shouldn't let him get away with it; At the very least, the fan deserves a personal apology from Gooden.

Even if Gooden apologizes, he'll surely hide behind the fans' heckling (which Cuban is already doing). I don't care what a fan says to a player, it's not OK for any of them to call the other one "faggot."

This isn't the first time an NBA player has been accused of yelling this at a fan. A bruhaha erupted in 2000 when Allen Iverson said it to an Indiana Pacers fan. That incident was caught on tape, so there was nowhere for the 76ers or Iverson to hide.