Brendan Burke with the Stanley Cup won by his dad's Anaheim Ducks in 2007.

There is a very touching and affirming story on ESPN.com about Brendan Burke, how he came out as gay and was accepted by his father, Brian Burke, the president and general manager of the Toronto Maple Leafs. Brendan Burke, 20, is a former hockey goalie who now assists the University of Miami (Ohio) college hockey team that is ranked No. 1 in the country. (Feb. 5. 2010 update: Brendan Burke dies in crash).

It is an uplifting tale familiar to many gay men -- discovering you're gay, then becoming so miserable about lying that you finally come out. In this tale, dad, step-mom and siblings accept Brendan unconditionally, as do the Miami players and coaches. Brian Burke even marched in Toronto's Gay Pride Parade with his son.

Brendan, who quit his high school hockey team over the anti-gay vibe in the locker room and the fear he would be discovered, said he told his story to show that hockey can be accepting of gay people.

"Imagine if I was in the opposite situation, with a family that wouldn't accept me, working for a sports team where I knew I couldn't come out because I'd be fired or ostracized. People in that situation deserve to know that they can feel safe, that sports isn't all homophobic and that there are plenty of people in sports who accept people for who they are."

The story is written by John Buccigross, a writer and broadcaster who is a friend of the family. He intersperses quotes from the Burkes and others in between Brendan's story that is written in the second person.

You believe that if an NHL player came out today, he would face a unique set of challenges but would generally be supported. He might face more verbal abuse from opposing fans, but you believe the overwhelming sentiment would be, "If he can play hockey, who cares?" That's the perspective you've encountered at Miami. You say a good way to start would be for ex-NHL players who are gay to be more vocal and talk about their experiences and challenges.

His dad Brian, also the G.M. of the U.S. men's Olympic hockey team for the Vancouver Olympics, makes the most gay-affirming statements I have ever seen from a sports executive:

"I had a million good reasons to love and admire Brendan. This news didn't alter any of them.

I would prefer Brendan hadn't decided to discuss this issue in this very public manner. There will be a great deal of reaction, and I fear a large portion will be negative. But this takes guts, and I admire Brendan greatly, and happily march arm in arm with him on this.

There are gay men in professional hockey. We would be fools to think otherwise. And it's sad that they feel the need to conceal this. I understand why they do so, however.

Can a gay man advance in professional hockey? He can if he works for the Toronto Maple Leafs! Or for Miami University Hockey. God bless [Miami coach] Rico Blasi! And I am certain these two organizations are not alone here.

I wish this burden would fall on someone else's shoulders, not Brendan's. Pioneers are often misunderstood and mistrusted. But since he wishes to blaze this trail, I stand beside him with an axe! I simply could not be more proud of Brendan than I am, and I love him as much as I admire him." 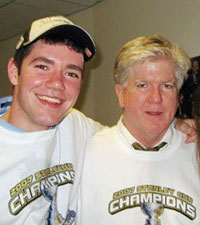 What's also cool is that the players on the Miami hockey team, and the coaches, have totally accepted Brendan being part of the program (he's a student manager who helps break down game tape). They are so blase about it ("OK, Burkie's gay. Who cares? Pass the beer nuts.") that it gets buried in the detailed reaction of Brian Burke. Maybe their nonchalance is the bigger story here.

Brian Burke told the Toronto Star that the reaction to the story has been "awesome" and that his e-mail has been flooded with messages that have so far been positive, though he expects some negative reaction. There is a great anecdote in the Star piece where Brian Burke tells of being confronted in California last year by anti-gay marriage advocates. "I told them to (expletive) get lost," he said.

Brian Burke hopes his reputation as a no-nonsense hockey lifer will add weight to the story.

"I've got six kids, I drive a truck, I own a shotgun and I chew tobacco, so sure, this adds a different dimension," Brian Burke said. "This isn't about me and it isn't about the GM of the Toronto Maple Leafs. It's about a young man who has done something that takes a lot of courage.

"But if my acceptance can turn into more acceptance on the part of other people, that's great."

Brendan Burke, who hopes to land a job in hockey, sounds like a great guy. That shouldn't be such a surprise when you consider the kind of man his father is.