NFL Week 12: Some teams know how to win, some don't

Share All sharing options for: NFL Week 12: Some teams know how to win, some don't

Colts spot Texans 17, yet rally to stay unbeaten; homophobe rushes for 107 yards; drive of the year; hot player is a stud safety.

The Indianapolis Colts' 35-27 win over the Houston Texans perfectly encapsulated these teams. One knows how to win and never panics, while the other always gags when the pressure is on.

The Colts (11-0) continued their remarkable regular season run and have now won 20 games in a row. They fell behind 17-0 to a Texans team fighting for its playoff lives and playing before an amped-up crowd. Houston had everything going its way against a Colts defense that looked overmatched and a Colts offense that saw Peyton Manning throw two first-half interceptions. The Colts were without pass rusher Dwight Freeney and could have afforded a loss, and they started out like they were heading that way.

Then a switch was turned on and the Colts scored 35 of the next 38 points. In a span of 15 seconds in the fourth, the Colts turned a 20-14 deficit into a 28-20 lead on a Manning TD pass and a Clint Session interception return. The Colts have won five straight games where they trailed in the final quarter, a modern NFL record. This was the second time in three weeks Indy came back from 17 down to win and the second straight year they spotted the Texans 17 in Houston and won.

This was the third game in a row Houston has gone belly up. Against the Colts in Week 10 and the Titans in Week 17, the Texans missed last-second field goals that would have sent the game into overtime. And Sunday, the Colts adjusted and the Texans never did and QB Matt Schaub threw two killer second-half picks.

Once 5-3, the Texans would need to win their last five to have any playoff chances. This team has talent but it not very well coached. It looks like Houston will go another year without getting the franchise's first playoff spot. I can see Coach Gary Kubiak losing his job; at some point, a coach has to take his team to the next level.

16-0?: The question now is whether the Colts can go 16-0. I still think they will lose somewhere down the stretch, especially since their history is to rest players when they have clinched home field.

Clutch: The best drive in the NFL this season was the 18-play, 99-yard masterpiece engineered by Vince Young and the Tennessee Titans to beat the Arizona Cardinals, 20-17. Young completed passes on three fourth downs, including the 9-yard game-winner to Kenny Britt as time expired. I have never been a Young fan, but that was a tremendous drive that gave the Titans (5-6) their fifth win in a row after starting 0-6.

Scrambled: Tennessee's win, combined with wins by the Jets and Ravens and losses by the Steelers (to the Ravens), Dolphins and Jaguars left the AFC wild card race wide open. Six teams are either 6-5 or 5-6, with Denver at 7-4, all fighting for two wild card slots. The Colts (11-0) have clinched their division, while the Chargers(8-3), Bengals (8-3) and Patriots (7-3 pending the Monday nighter at New Orleans) look pretty solid to win theirs.

The NFC is less muddled, with the Eagles and Packers (each 7-4) occupying the two wild card slots, a game ahead of the Giants and Falcons. The Vikings (10-1) and Saints (10-0) are virtual division locks, while the Cardinals should win the West. The Cowboys (8-3) lead the East, but Dallas needs to overcome a history of recent December collapses before Cowboy fans believe.

Hard charging: Don't look now, but the San Diego Chargers (8-3) have won six games in a row and are a real force in the AFC. San Diego has games against the Cowboys and Bengals coming up, plus a trip to resurgent Tennessee, but a first-round bye is clearly in their grasp (I think this will come down to the Chargers or Patriots). Hard to believe that they were once three games behind Denver in the AFC West.

All's forgiven: Rip your coach and use three anti-gay slurs? Have a history of violence against women? No problem - as long as you can play, you'll find a home. Larry Johnson was cut by the Chiefs, yet was snapped up by the Bengals when Cedric Benson got hurt. Johnson ran for 107 yards as the Bengals (8-3) beat the Browns (1-10), 16-7. So much for Johnson paying much of a penalty for his actions. He went from a 3-8 team going nowhere to a likely playoff team.

Season-saver: Atlanta's last-second 20-17 win over Tampa Bay with QB Matt Ryan injured and on the sidelines kept the Falcons (6-5) in the NFL wild-card hunt. A loss would have knocked Atlanta two games behind the Eagles and Packers. The Falcons are not playing well and are really injured, but they lived to play another day after backup QB Chris Redman hit Roddy White for the game-winning score on fourth down.

Can't stand them: The Minnesota Vikings are 10-1 and a certain playoff team and Super Bowl contender. But I can't stand watching them. I was once a Brett Favre fan but grew tired of his diva act, and now want him and the Vikings to lose every week. I find them hard to watch because of Favre lovefest that occurs on each broadcast and because they have played few teams so far that have challenged them. I can't stand the Patriots but find them eminently watchable; the Vikings are the opposite. Yes, I know that being a fan is irrational.

Hot player of the week: Tampa Bay safety Sabby Piscitelli is 6-3 and 224 pounds with probably 5% body fat. He first caught our attention with his hot "look at my abs" shot: 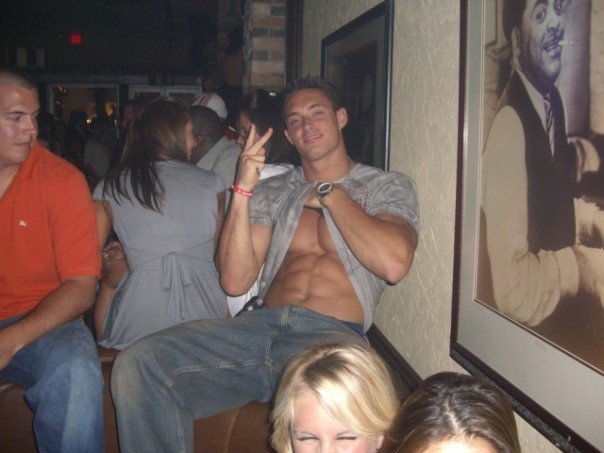